Wroclaw University Library want to express gratitude to all sponsors and donators, who supported financially or materially Library in recent years.

The donation of the heirs of dr. Hans Peter Syndikus for the University Library in Wrocław 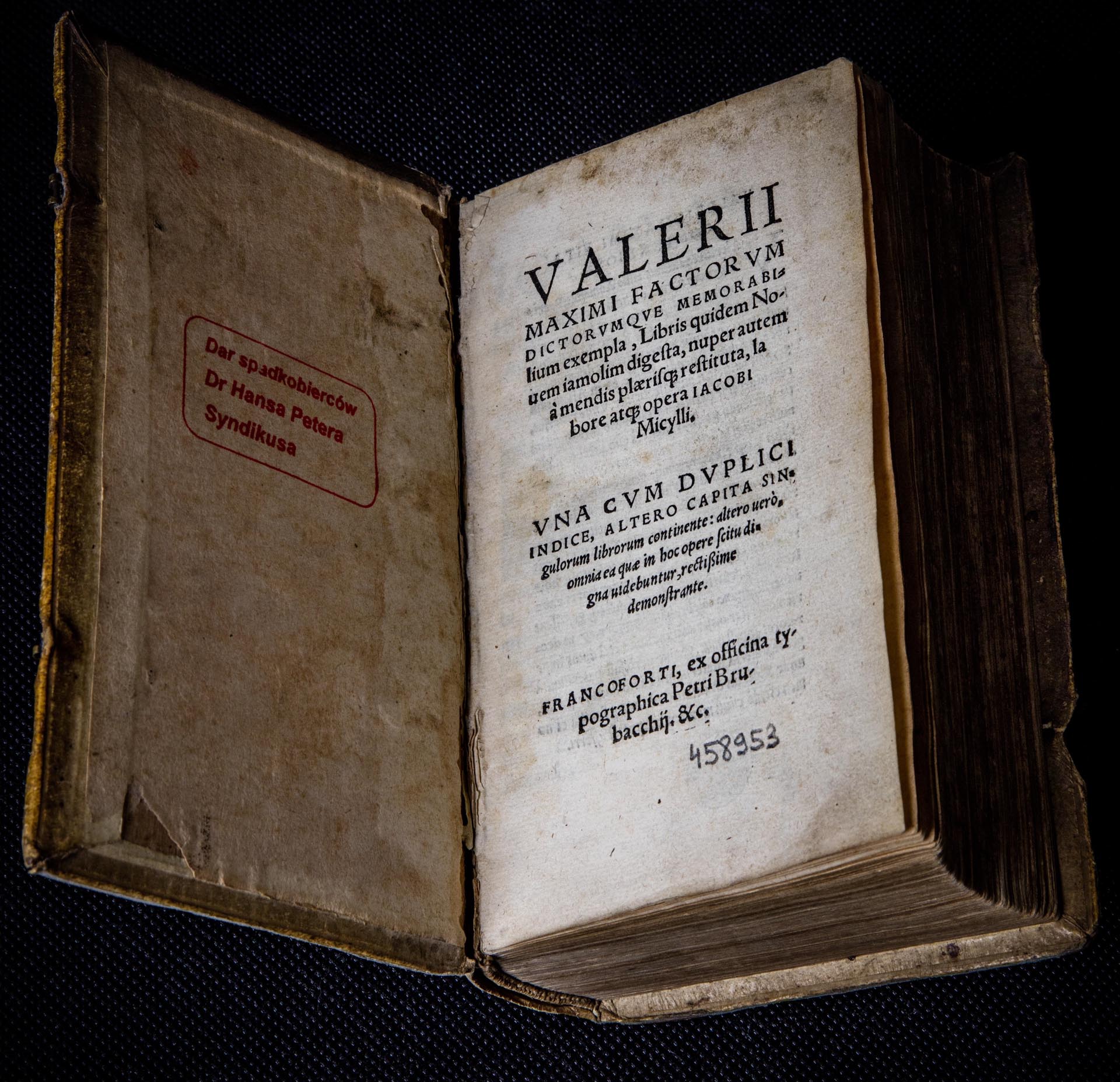 On January 17, 2022, the children of Dr. Hans Peter Syndikus from Weilheim, Bavaria, donated to the University Library in Wrocław his private library in the field of classical philology, in total 1960 volumes. The books donated are text editions of ancient authors and some humanists, scientific commentaries on these works, as well as authoritative secondary literature (especially poetry). In addition, there are the usual encyclopedias and reviews, and finally texts and the most important secondary literature from adjacent thematic areas (ancient history, philosophy, theology).

Particularly valuable are the 50 old prints by Latin authors, which Dr. Syndikus often took into account when he critically asked for the best possible text. As the author of the interpretations of Lucan (1958), Horace (2 volumes, 1972/1973, 3rd, newly edited 2001 edition), Catullus (3 volumes, 1984–1990, last 2001) and Propercjo (2010), as well as essays and numerous review, Dr. Syndikus has always wanted his well-stocked library to serve the academic community and make its works available to students and scholars.

On 5.03.2020 - the University Library received a facsimile of the Wroclaw Psalter (together with a commentary) from the Quaternio Publishing House from Lucerne, Switzerland, whose original is kept in the Fitzwilliam Museum in Cambridge, England. [Photo gallery]

Donation from Teresa and Kazimierz Kotasiak

In March 2019, Mrs. and Mr. Teresa and Kazimierz Kotasiak donated to the Wroclaw University Library a collection containing one serigraphy and 30 engravings titled “Warszawska Architektura Przemysłowa” (“Warsaw Industrial Architecture”) from the “Portret Warszawy - początek XXI w.” (“Portrait of Warsaw - the beginning of the 21st century”) collection.

Due to efforts of Professor Rudolf Lenz from Marburg, historic main portal of the Wroclaw University Library’s building on Sand Island on Św. Jadwigi St. 3/4 was restored to its historical look. Restoration and conservation works were made from the funds of the government of the Federal Republic of Germany donated by German government plenipotentiary for culture and media - minister Neumann. Restoration of sculptures from the portal was founded by an anonymous sponsor, whose participation in the renewal of the portal is also owed to the efforts of Professor Rudolf Lenz.
The ceremonial opening of the renovated portal took place on 14th November 2013.

On 21.11.2012 The Institute of Art of the Polish Academy of Sciences in Warsaw donated to Wroclaw University Library valuable historical manuscript, that was a contract between administrators of St. Elizabeth church and Wilhelmem Haupt, Wroclaw’s pipe organ builder, for the repairs and corrections of the organs from St. Elizabeth church. The document was found in the Collections of Photographs and Survey Drawings.


Donation, on request of the Author of memories,
donated by Publisher
to the Wroclaw University Library

On 30.11.2012, in the presence of the Rector of the Wroclaw University, prof. Marek Bojarski, the Publisher Edmund Miller, fulfilling the wish of the Author - André le Guillou – handed to the Director of Wroclaw University Library – Grażyna Piotrowicz – typescript of memories of the Author from besieged Wroclaw from the period of January 1945 to May 1945. Moreover, Publisher also donated book that was published in 2002 by Niesse Publishing House, that contains that memories in French and German. Both documents were included into the Silesia-Lusatian collection.

Maps Department of Wroclaw University Library enriched it's collections by receiving as a donation from mgr. Jerzy Sokołowski, manager of Maps Department of Jagiellonian University Institute of Geography and Spatial Management, doublets of reprints done during occupation time of 431 sections of Polish Army Geographic Institute tactical map in scale 1:100 000 (description from years 1931-1937).

Jean Marie Strelcyn, professor of mathematics on universities of Paris and Rouen, donated Library with collection of books, that was gathered by him from the 70's of XX century. Collection consists mainly of publications in Russian, French and English on literature, history and politic – mainly Russian and Soviet. What make this collections especially valuable, is that it includes emigrant editions, censored and uncensored versions and low rated editions (up to 150 copies). Act of donation was signed in June 2008.


Donation from Herbert and Ursula Felkel

On the 10th of July 2008, Mr. and Mrs. Herbert and Ursula Felkel, connected for generations with Srebrna Góra, donated Silesia-Lusatian Cabinet collections with 41 annals of "Unsere Heimat" periodic, post-war continuation of "Frankenstein-Münsterberger Zeitung" journal. On their own initiative, for 7 years they complemented numbers, that were missing in our Library, with intention to hand them over to us.

In October 2007 mgr Piotr Ropuszyński – manager of Library of the Meteorology and Climatology Department donated Manuscripts Department collection with two letters of Albert Einstein from years 1920 and 1922. This letters were previous in possession of prof. Aleksander Kosiba and were donated to the Library accordingly to the last will of Professor dead in 1981.

Due to efforts of prof. Rudolf Lenz from Marburg, government of Federal Republic of Germany, and precisely its plenipotentiary for culture and media issues, donated 50.000 euro for renovation of roof of Library's building on Sand Island.
On the 18th September 2007, during ceremony on this behalf, JM Rector of University of Wrocław, prof. Leszek Pacholski received this donation.


The Mikołaj Rej District and City Public Library in Oleśnica

On the 26th of May 2006, Prof. Dr. Hanna Koenigs-Philipp from Munich donated Old Prints Department with Polish print from 17th century:

Print was in possession of Donator's Father, Prof. Dr. Wernera Philippa (1908-1996), that was born in Wroclaw.

Prof. Dr. Dr. h.c. Rudolf Lenz from Marburg donated Manuscripts Department with one set of pads for codex protection during their presentation.

Purchased collection of letters from years 1770-1815 addressed to J. G. Schneidera, professor of University of Wrocław and director of Wroclaw University Library.